This is a photo of me three weeks after my first chemotherapy treatment. I had my sister-in-law cut off the hair that remained.

In August of 2014, I went in for my annual mammogram, nine months late, because in the past they were excruciating due to my breast type and I had become extremely fearful. Surprisingly, I experienced no pain this time, but I left the office with a feeling of foreboding. I just knew something was wrong. I tried to dismiss those feelings as paranoia, but I simply couldn’t.

Three days later, I received a phone call from the doctor's office. The nurse informed me that my results were abnormal and they wanted me to see their breast specialist. I called to make the appointment and realized they wanted to see me right away. When I saw the specialist, she explained that my mammogram results showed pin pricked calcium deposits all over my left breast. She stated that calcium is a sign of cell degradation and that it could be a sign of cancer. She told me she wanted to do an ultrasound immediately.
I wasn't sure what to tell my husband, but I was sure he would panic, and he did! I tried to reassure him that everything was fine, but I still couldn't shake the feeling that something was wrong. After the ultrasound, the radiologist read the scans and found a strange mass. The breast specialist ordered an M.R.I., which also confirmed the mass.

Things were moving very quickly from the time of the mammogram. Within a few days I had a biopsy. I laid there with a tears running down my face. Not because of any pain, but because I was in disbelief that I was in this situation. Literally, days later my husband and I went to see the specialist. She confirmed my biggest fear! It was Cancer! Although she was giving us bad news, she was very positive because she believed the cancer was only in the milk ducts and classified me with stage 0 cancer.

Initially I felt like I would cry, but then I became overwhelmed by the good news that the cancer hadn't spread throughout my body! But my husband, on the other hand, was torn up by the diagnosis. His older sister had died from cancer a few months earlier after a second bout with breast cancer that had become bone cancer. I'm sure he was scared of what could happen. I felt I needed to remain calm for both of our sakes. But even with the news growing worse, I had full trust in God.

The specialist explained to us our options. I had a choice between a lumpectomy, which would leave me deformed or a mastectomy with reconstructive surgery. She also said I had the option of doing a double mastectomy as a preventative measure. I spoke with my mom, my cousin, and then again with my husband and decided to do the double mastectomy with reconstruction. I notified the specialist of my decision and they scheduled my surgery for October 2, 2014.

A week or so after the surgery I went in to see the specialist to get the results, but was faced with more bad news. The left breast had eight clusters of cancer cells and they had gotten out of the milk ducts. During the surgery, they removed the Sentinel node under my left arm to make sure the cancer hadn't reached my lymph nodes. Thank God, it hadn’t. The doctor elevated my stage 0 cancer to stage 2A and informed me that the Oncologist would probably want me to have chemotherapy treatments. The news saddened me because of my fear of what chemotherapy would do to me. I hate to admit that my main concern was about losing my hair and possibly losing too much weight. A few weeks later I saw the Oncologist and he verified that he wanted me to have six chemotherapy treatments. 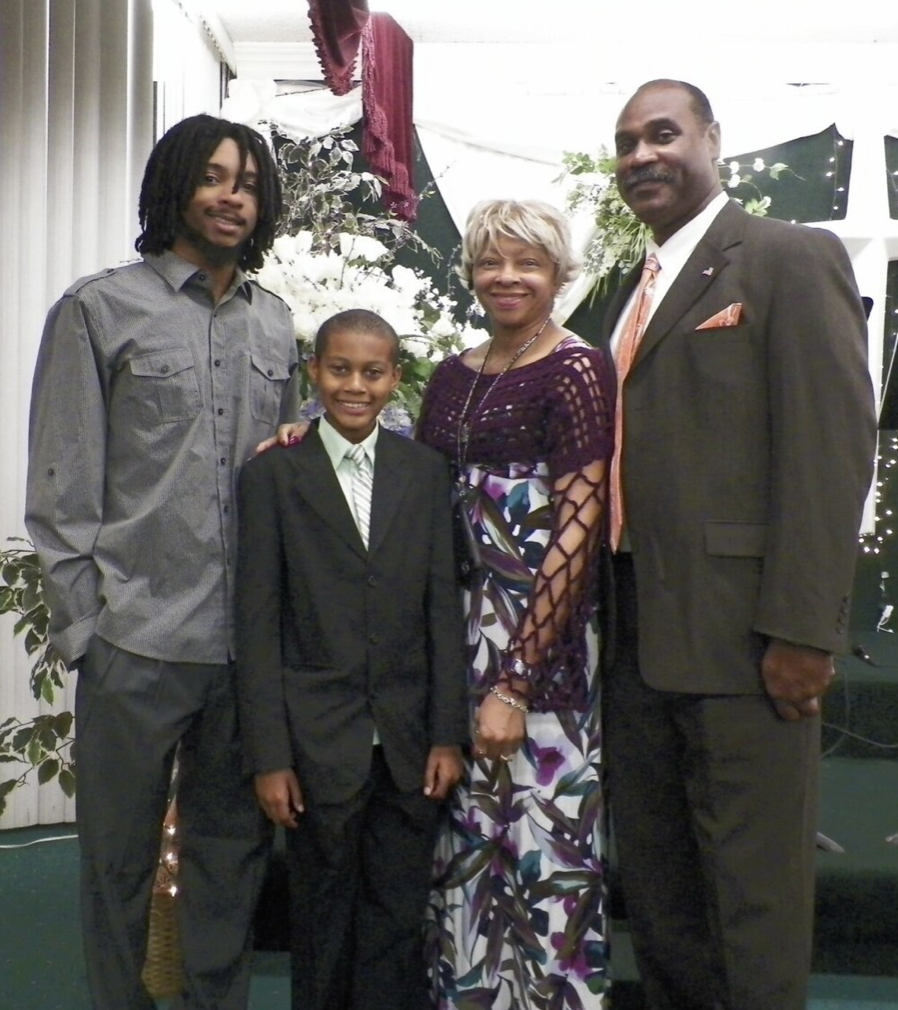 Me with my family at the baptism of my younger son, after the completion of chemotherapy

At this point I was devastated. In the best of circumstances, I carry very little weight and I honestly didn’t know if I would be able to survive six treatments of chemotherapy. I had heard so many horror stories of the side effects and I was scared that I would lose too much weight.

In November I had my first chemotherapy treatment. I had a violent allergic reaction! After iney treated me with Benedryl, we continued the treatment and all went well. Around the 2nd or 3rd day I started feeling very lethargic and I could barely move. But Praise the Lord, I had no nausea or vomiting.

Two weeks after the first treatment, I visited my hair stylist and my hair began to fall out. I wasn't ready for that to happen, I had prayed I wouldn't lose my hair, but God had other plans. I cried.
Before my 2nd treatment, I began to run a fever of 104. I was hospitalized for several days while they looked for a possible infection - they never found one. After several days the fever broke and I was released to go home.

During this whole test I had a hunger for the Word of God. I began to read every bible verse and listened to sermons on healing. My verse of promise was Psalms 118:17, “I shall not die, but live, and declare the works of the Lord.” At this point, I genuinely believed I would live, but it wasn’t until I finished chemotherapy that I fully understood the meaning of the verse for my life.

My mom was my other source of strength, next to God, throughout this period of time. She went with me to my first treatment and several others. With each treatment, different family members were able to take time off from work and sit with me for three hours. Members of my church were actively praying for me and offering welcomed support. I kept expecting to get worse, but the only thing that ever happened was that my fingers and toes became a little numb! I could feel God’s help.

Not only did I not lose weight I gained 20 lbs during my treatment which is another miracle since I’ve never been able to gain weight. The Oncologist even said it was normal for breast cancer patients to gain weight, and then lose it, but I haven’t.

At the end of November, I was able to return to my full time work part time as well as to continue to paint. Actually, my painting never stopped all throughout chemo and to my amazement I believe God sent me message through my painting above, “Fear No Evil,” months before I was diagnosed to protect and prepare me.

My last treatment was February 3, 2015. I have been well ever since and I am thankful for my strength and courage. And I know God has been faithful to me in so many ways, protecting and guiding me through my journey. So I'm here today to let you know during this whole breast cancer experience whenever I’ve had the opportunity to declare the works of the Lord, I do!

A portion of all sales are donated to the St. Jude Kathryn T. McCarty Breast Center.

Sign up for our Newsletter!
© 2021, Berry's Divine Designs. All Right Reserved